Boxing is the reality for tv’s paddy reilly

We’ve seen reality television stars step into the boxing ring several times in recent years. TOWIE’s Mark Wright and Kirk Norcross slugged it out for charity in 2010, and more recently Lewis Bloor defeated Heavy D in Boxing with the Stars before later calling out Geordie Shore’s Aaron Chalmers. Bianca Gascoigne has signed up for the next event, and – as the list of familiar faces willing to lace up the gloves continues to grow – it looks like celebrity boxing is in fashion.

Casual observers would be forgiven for thinking that Paddy ‘Geezer’ Reilly – star of STV’s GLOW – is following this trend. Reilly has all the swagger, charisma and sharp appearance of a reality TV celebrity, but make no mistake about it: he is a fighter.

Boxing came well before television for Reilly who has been training and fighting for five years. In an interview with On The Ropes TV, Paddy explained that – whilst he came to boxing late after a career in football – he is dedicated to the sport and single-minded in his pursuit of success. Reilly has been training relentlessly since trading the football pitch for the boxing ring and, motivated to prove naysayers wrong, has sought expert guidance along the way.

Paddy’s close friend and fellow On The Ropes boxer Ben McGivern has been pivotal in his transformation. It was McGivern, himself an excellent amateur turned professional, who convinced Paddy to go to the boxing gym and has helped sharpen his skills. There have also been grueling training camps with some of the sport’s top figures including former British, Commonwealth, European and WBO world champion Alex Arthur, and former professional Colin McNeil and his side-kick Stephen Henderson. This experience has been invaluable in converting Reilly’s raw potential into a well-rounded, disciplined fighter.

Reilly turned professional with On The Ropes boxing in 2016 and has had two convincing victories against durable opponents. Importantly, both fights have went the scheduled four round distance giving the Airdrie man more experience in the ring as a professional. The Geezer put on a confident display in his last outing in March – stalking his opponent and dominating every minute despite breaking his hand in the second round. 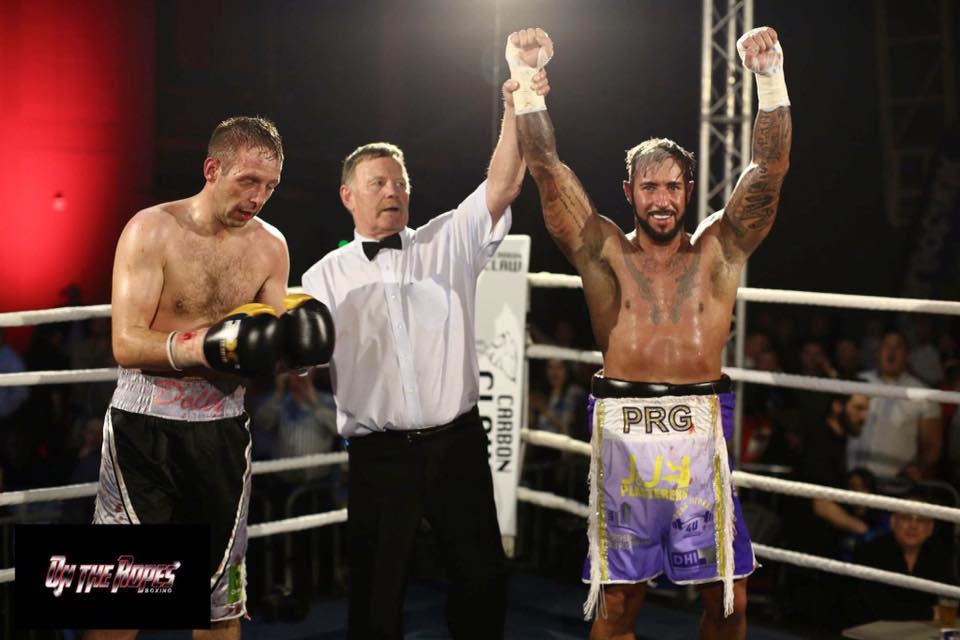 Followers of Reilly on social media can keep up-to-date with the training camp for his next bout in June with Preston’s Stuart ‘Mad Dog’ Maddox. And whilst they may see glamour and television cameras they will also see a talented professional fighter hungry for boxing titles. Reilly’s shows have the flamboyance and entertainment to match celebrity boxing, but they’re no exhibitions. Anyone who has heard the thud of the man’s body shots can attest – this is the real deal.

Get your tickets for Hell or High Water, 10th June at Linwood’s On-X Centre, by contacting the fighters or email john@ontheropes-boxing.co.uk