Enzo calzaghe, one of a kind

The very sad news was released yesterday that Enzo Calzaghe had passed which has seen tributes flood in from the boxing world for the legendary trainer. The Sardinian born trainer guided his son Joe through a decorated career that led to them securing the WBA, WBC and WBO Super Middleweight titles whilst also retiring undefeated. Enzo also cornered fellow welsh boxers Enzo Maccarinelli and Gavin Rees to world titles, but it was always that special bond he had with his Joe that captured the hearts of boxing fans around the world.

A video surfaced yesterday of an emotional Enzo being the proudest man on the planet after watching Joe be an inductee into the international boxing hall of fame along legends of the sport such as Oscar De La Hoya, Mike Tyson and Mohammed Ali. For me, it demonstrated the love and respect between a father and son and a bond that could never be broken by the challenges of everyday life or of those faced within a boxing ring at the top level.

What made their achievements even more impressive was the lack of resources they had to work with at Newbridge boxing club which Joe once joked he could get injured by leaning against the walls. Enzo famous for his old school drills which included punishing runs down the valleys regardless of the weather which would be a staple of Joe’s training regime before fights. 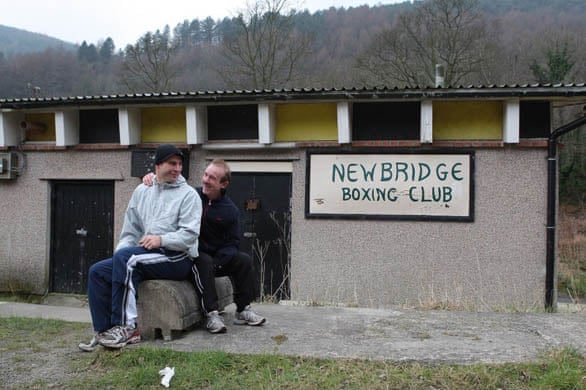 Enzo was born and raised in Bancali on the Italian island of Sardinia before his family moved to Bedford after World War Two. He travelled round Europe after completing his national service in 1969 where he made money from busking often sleeping rough until he ended up working with his relatives in a café they owned in Bournemouth. Enzo met his wife Jackie when he boarded the wrong train which was headed to Cardiff. They later married and moved to Wales where they had 3 children of whom Joe was the first.

Joe started boxing when he was being bullied at school and Enzo made the decision to take him to Newbridge boxing club to toughen him up. After a short while training at the gym, Joe’s impressive hand speed had caught the eye of trainer Paul Williams. Enzo would soon assist Williams with training Joe and other fights and take over the reins from Williams when he retired.

Joe Calzaghe is a big reason why I got into boxing and I will never forget the big nights against the likes of Jeff Lacy, Bernard Hopkins and Roy Jones JR. It’s only as I got more into the sport I released the importance of a fighter’s trainer and how their management and guidance is the difference between a world champion achieving everything in the sport or another potential talent falling by the wayside. Trust is also a massive factor between fighter and trainer and who better to have in your corner during your toughest challenges than your father. Enzo will be sadly missed by the boxing world and I don’t think we will see a formidable father/son team like Enzo/Joe again. One of a kind!