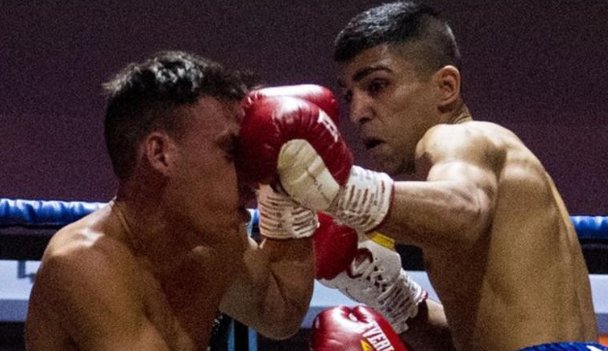 It was an historic evening in Glasgow (September 27) as two Scotsmen fought for a British title for the first time in a generation. The hosts, St Andrews Sporting Club, are a boxing institution steeped in tradition. And the eventual winner of the main event, Ukashir ‘Kash’ Farooq, became the first ever Scots-Pakistani, indeed the first ever British-Pakistani, fighter to win a British title.

Farooq obliterated fellow Scot, Jamie Wilson, within 70 seconds of their bantamweight contest. As the first bell rang, a spectator instructed Wilson to take his time and ‘feel out’ his Glaswegian opponent. But Farooq was predatory, punishing Wilson’s timid jab with a thunderous right hand to the side of the head, flooring the Dundonian. He was drawn to the canvas with magnet-like force, making Farooq’s entrance music, ‘here comes the boom’, appear prophetic. On reflection, Wilson never recovered from this perfectly timed shot, which looked as mentally shocking as physically painful.

A brave Wilson rose to his feet to be met with further punishment. Vicious, lightening quick combinations knocked him down again. There was a case for stopping it there as a dazed fighter struggled against the ropes. But the referee, wanting to gift Wilson an opportunity in one of the biggest nights of his career, let the contest continue. In inevitably brutal fashion, Farooq pounced to unleash more shots, flooring Wilson a third time, as the referee signalled the end.

It’s not uncommon for a fighter to get caught early and then overwhelmed by a barrage of strikes. But this was not fluke or good fortune; there was composure and intelligence within the whirlwind of punches, demonstrating Farooq’s class.

Kash, who had waited for over nine months for his shot, was crowned the new British bantamweight champion in front of a packed home support. He told BBC Sport Scotland:

‘I’m over the moon; I can’t explain how I feel right now. I was expecting it to go twelve rounds and didn’t expect to knock him out like that. He went the distance with Josh Wale so I was expecting [longer].’

‘He made a mistake straight away, as soon as he threw the jab I found an opening, and that was it. I’m quite good with the [over hand right].’

Farooq is now king of the domestic bantamweight division, and fans will be keen to see another all-Scottish clash in the near future, this time with the promising Lee McGregor. The Shane McGuigan-trained McGregor challenges for the Commonwealth strap next month and, if victorious, would set up a massive fight in Scotland for both titles.

‘Lee is a good friend of mine’ explained Farooq ‘and he’s a cracking fighter. I hope he does it and down the line I’ll be ready for him.’

‘I’m really excited for the future. I didn’t have the best start to my pro career but over the last year or so I’ve really picked it up and seeing the rewards.’

BBC Sport Scotland broadcasted the event live. And if this was a litmus test to see if domestic boxing could entertain the viewing public at home then it passed convincingly. The other two fights in the evening were also highly enjoyable.

Aberdeen’s Dean Sutherland took on Kevin McCauley of Stourbridge. McCauley is one of the most experienced journeymen in the sport with over 200 contests to his name. He has faced credible opponents, such as Frankie Gavin and Bradley Skeete, and won a British area title against Dave Ryan, in a career spanning a decade. In contrast, Sutherland, only 19, is by any definition a boxing novice with only two previous contests, and no amateur history in the sport.

Yet Sutherland was impressive and dominant. Prospect-journeymen contests can be uninspiring at times, but Sutherland demonstrated skills beyond his experience, and excited the crowd with variety and creativity. His movement was special, naturally side-stepping and circling his opponent to find angles and pierce his guard. It wasn’t superficial. This wasn’t the boxing equivalent of a young footballer displaying tricks without a final product. Sutherland repeatedly finished his impressive foot-work with powerful shots to the head and body, not least a shattering uppercut that broke McCauley’s nose in the first round.

McCauley, a durable veteran, inevitably heard the final bell, but would have been impressed by his relentless young foe, as blood and sweat sprayed across the ring throughout the 12 minutes. Sutherland had no right to dominate and bamboozle a man who has completed over 900 rounds of professional boxing, but he did that decisively and without receiving a significant punch in return. The Aberdonian is one to watch.

In the opening bout, Boris Crighton made an impressive professional debut as he stopped Ivo Krastev in the second round of their contest. Crighton is the 2018 Scottish amateur champion and two-time British amateur champion, and this experience and pedigree was clear. He oozed confidence as he governed centre ring, hands remaining low at his waist, and leading with left hooks and straight rights at times. Crighton’s most impressive quality was his sharp counterpunching. He offered his unguarded chin to entice his opponent before quickly striking in return. Counterpunches felled Krastev in the opening and second round, before the referee justifiably stopped the fight. The light-heavyweight prospect was memorable and performed well in front of the busy venue and television cameras in his first professional appearance.

It was our first time at a St Andrews Sporting Club event. The organisation has been putting on shows for 45 years in Scotland, and has hosted countless Scottish, Commonwealth, British and even world title fights. It retained a sense of tradition with its strict formal attire and noted guests. Smoked filled the air, and whilst in 2018 this was from after-dinner coffees rather than tobacco, you could imagine the cigars of yesteryear, offering a nostalgic feel. Yet, we were surprised at how well St Andrews bridged the gap between the traditional and modern. It didn’t feel dated. There was a sense of occasion and ceremony enjoyed by old and young alike. And, on the night, it was a young fighter, Kash Farooq, who made history, and his future looks incredibly bright.