It was a night of fresh starts in Glasgow as a reformed MTK Global held their first show in the city, in a venue new to boxing, and involving a mix of fighters fresh to the sport, and established names returning from loss, injury and inactivity.

The Emirates Arena is an impressive spot, built for the 2014 Commonwealth Games, it stands across from Celtic Park in the east end of Glasgow. Josh Taylor and a host of notable fighters, celebrities and the Box Nation cameras were present at the Night of Boxing, adding to the sense of occasion. If it is MTK Global’s intention to regularly host entertaining and credible nights of boxing in Scotland then they made a promising start on August 24.

David Brophy, former Commonwealth super-middleweight champion, returning from injury and a high profile loss, rewarded his sizable home support with an emphatic fifth round stoppage win. There was a risk that Brophy – out of the ring for almost ten months – would be cautious as he eased his way back into action. But the Caldercruix man was predatory from the opening bell, dropping Norbert Szekeres with a thunderous left hook to the body.

It was a shot that landed with success throughout the fight, clearly hurting the Hungarian, and drawing gasps from the crowd due to its ferocity. Brophy offered greater variety as the fight progressed, introducing uppercuts and combinations. It was astonishing that Szekeres lasted so long, testament to how tough he is, but he eventually succumbed to a barrage of punches in the fifth round. Brophy, still only 28, with experience at the highest level and a significant home support, should have a bright future in the sport as he sets his sights on the British title.

The highly talented Kieran ‘Chopper’ Smith made his return after 14 months of inactivity. The southpaw from Greenrigg had a frustrating mix of injury and promotional difficulties in 2017/18. He could have been excused for being off-the-pace considering the long absence, but there was no sign of rust as he cruised to a dominant points victory over Miguel Aguilar. It can be difficult at times to look good against tough journeymen who hold tight guards and are built to survive. But, while Aguilar did make it to hear the final bell, Smith put on a thoroughly impressive, confident and exciting performance. It was arguably the classiest of the night.

Smith’s shot variety was excellent as he employed a razor sharp jab, uppercuts and – side stepping to create space – combinations to the head and body. He seemed eager at times to dispense of Aguilar but in retrospect will be glad of the additional rounds. Smith now has a record of 11-0 and should be climbing the light middleweight rankings in the coming months.

Scottish boxing fans are accustomed to having one key figure in the sport at a time. Ricky Burns dominated the last decade, and Josh Taylor has now assumed the position of top fighter in the country, edging closer to titles and stardom. But, scratching beyond the surface, there’s a host of promising fighters who may be destined for world honours in future. None more so than Carstairs’ Willy Hutchinson. Hutchinson is a former amateur star – Scotland’s only youth world champion, now signed to Ringstar and Frank Warren, and guided by Dominic Ingle. Those sorts of figures in the sport rarely back duds. And whilst its still very early in his professional career, Willy looked impressive against Manchester-based Iranian Taha Mirhosseini.

Taha landed a strong counter left hook in the opening round as Hutchinson, clearly winning, looked over eager at times. But he settled well into the second and began punishing the Iranian at will. Hutchinson landed a mighty show-reel right hand to stop Taha in the third; he somehow made it to his feet but the contest was waved-off just as the towel was coming in. Hutchinson looks physically imposing at only 20 years old. He may need several more fights to gain professional experience, but in time will be involved in mouth-watering light heavyweight clashes, in a stacked division with Joshua Buatsi and Anthony Yarde domestically, and a number of stars internationally. Hutchinson will have opportunities to fight across the UK and abroad, but it would be a pleasure to see him fight back in Glasgow soon.

Stephen Tiffney could have done with several rounds after being out of action for around nine months. The Newtongrange lightweight was defeated by fellow Scot Lewis Paulin in an ill-tempered affair back in December 2017. But he took less than a round to finish Johnson Telez as he nailed the Nicaraguan with a powerful uppercut that sent him to the canvas. It was a sweet shot that may have exorcised some demons. Tiffney should be out again by the end of the year in a more competitive match.

The Glasgow fans were treated to three Irish fighters on the bill. And each brought an impressive skillset and vocal support. Glaswegians listening to patriotic Irish songs are usually located across the road at Celtic Park, or down a mile or so away in the Gallowgate’s many Irish boozers, so it was a rare treat to hear these anthems belted out in a boxing arena.

Dublin’s Stephen Ormond was involved in a brilliant toe-to-toe war with Ghana’s George Ashie. Ormond edged the first half of the fight with relentless pressure, holding centre ring and often maneuvering Ashie to the ropes before detonating strong body shots. But by the middle rounds Ashie was starting to counter well and with quick hands managed to land a strong counter punch to floor Ormond. The Irishman responded well, unleashing flurries of shots, and returned the favour by knocking the Ghanian to the floor. The closing rounds were an all out slugfest – a battle between Ashie’s counter punching and natural fitness to Ormond’s volume, pressure and sheer determination. Ashie’s attempts to box clever were suffocated by Ormond’s intense and never-ending offensive barrages.

The Irishman got the nod and very few, a part from the African corner, who looked utterly dejected, had any real complaints. And, considering Ormond’s recent history of being on the losing end of close decisions, it was good to see him ecstatic as his hand was raised. It was a close match edged by greater work-rate and volume of shots. At 35 this was a crossroads fight for Ormond: a loss would have brought an uncertain future, but victory may be rewarded with a title shot of some kind as Ashie was a world-ranked fighter.

Former six times elite Irish amateur champion and Rio Olympian David Oliver Joyce was not a happy man in recent weeks. The ambitious 31 year old lightweight had won seven fights since turning professional only a year ago. He is looking to be fast tracked in a similar fashion as other experienced Olympians like Paddy Barnes and Joe Joyce. The man from Mullingar jumped at the chance of fighting Ronnie Clark, the Dundonian whose profile rose after a shock win against English prospect Zelfa Barrett back in February.

Clark would have represented a step up in class for Joyce, and tested how well that amateur pedigree has transferred to the professional ranks, but he pulled out after injuring his hand. Instead, after another pull out, in stepped durable Mexican Arturo Lopez. Joyce started at a frightful pace, whipping in shots to the body, and pushing his opponent to the ropes. The Punisher was demonstrating his moniker in action. 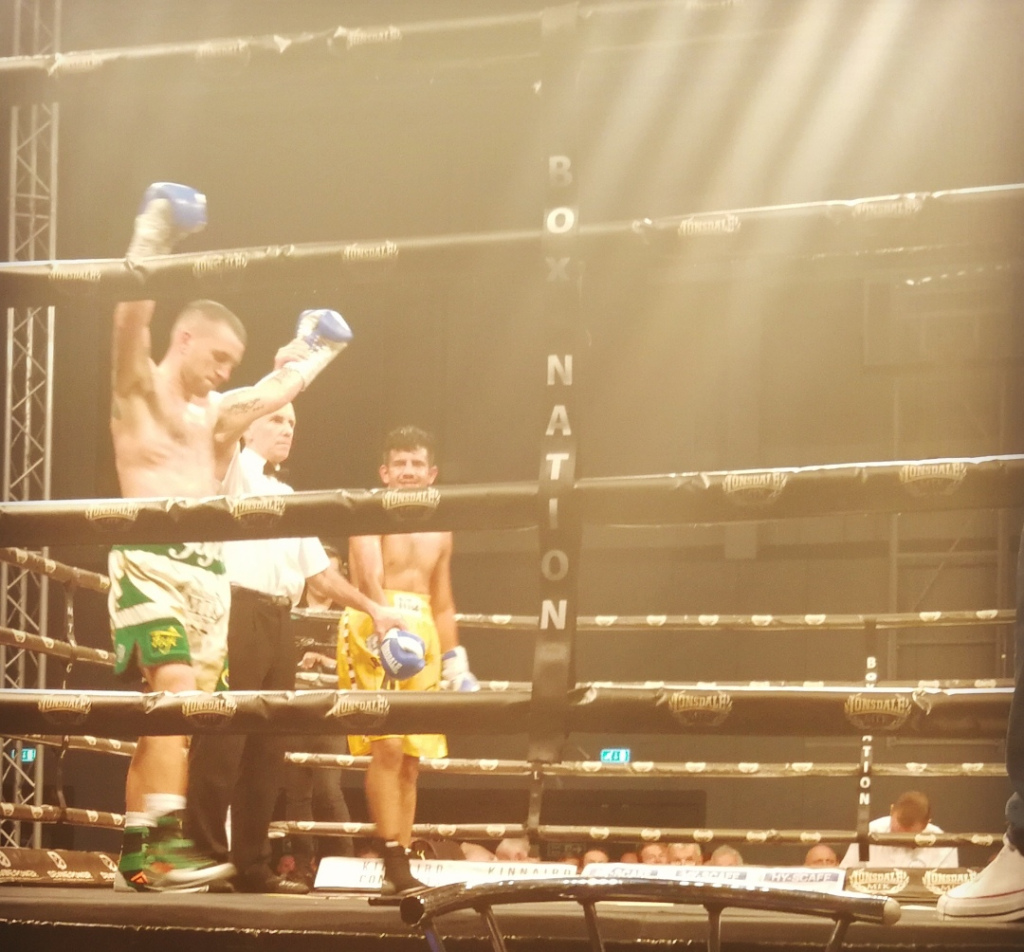 Lopez was tenacious. He wasn’t here for a quick payday or instantly falling to the floor upon impact. He managed to endure repeated onslaughts and fired back to the best of his ability. But the Irishman displayed glimpses of brilliance; the difference in class was clear as Lopez’ crude style was overran by Joyce’s excellent footwork and movement, and quick, accurate combinations. The referee called a halt to the fight in the sixth round to the Mexican corner’s disgust, but in truth he was not in the fight by some margin. Fans will be intrigued to see Joyce out again soon against against credible domestic opposition.

MTK did a stellar job replacing fighters who were forced to withdraw through injury. In some cases these had to be journeymen, but in others quality and experienced boxers were found. Ireland’s Darragh Foley was scheduled to fight local hero Willie Limond, but the Glaswegian pulled out two weeks ago. In came tough Welshman Chris Jenkins who promised to test Foley’s seemingly unwavering confidence.

Foley is a son of Ireland and its far reaching diaspora. Born in Kent to Irish parents seeking employment in England, he then spent much of his life in Ireland before moving to Australia to carve his own dream. Foley established his name in the professional boxing game, like many Irish fighters down under or in the States, and achieved success in a relatively short time. He picked up several state titles at lightweight and super-lightweight before more recently winning the WBO Oceania super-lightweight belt.

Unfortunately, the fight ended in anti-climatic fashion as an accidental head clash caused a significant cut above Jenkin’s eye. The contest was ruled a technical draw after the third round and Foley retained his WBO title.

Foley was hoping that this would be his breakout fight in the UK and Ireland, and he would start to make a name for himself in the northern hemisphere. In truth we didn’t learn anything new in those three rounds. Jenkins is a solid fighter with good boxing fundamentals, and Foley is charismatic, expressive and confident. If nothing else the fans were entertained and would be interested in seeing the rematch, or indeed the original bout with Limond. Foley winding up a strong home support would be a sight to behold.

Dumfries’ Chris Trigger Wood – the first professional boxer from his home town in over 30 years – improved his record to 2-0 with a decision victory over Manchester’s Darryl Sharp. 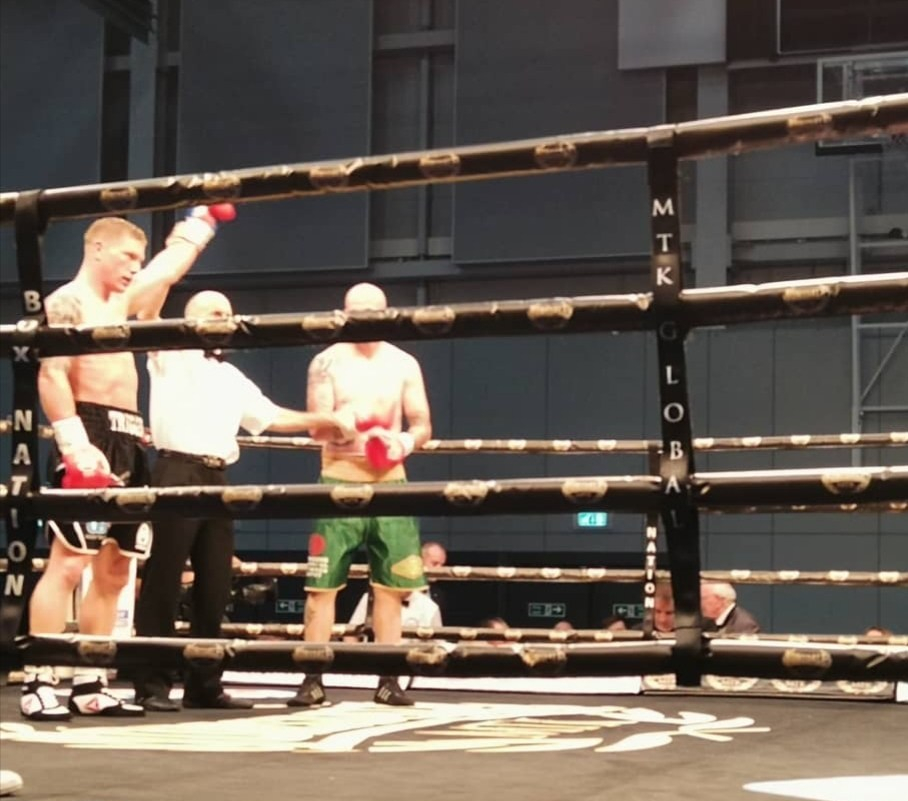 We weren’t sure what to expect as Wood climbed through the ropes. He is without any real amateur experience and, at the age of 30, was making only his second professional appearance. But that apprehension was quickly dispelled as the physically fit super-middleweight quickly looked dominant and composed. Wood selected his shots well – varied and effective – and was not rushed or forced as many novices may be. He seemed a novice only on paper, and won comfortably after four rounds in front of his young family.

It was great to see Aidan McGlynn maintain his unbeaten record and move to 4-0 with a points win over the truly robust Taka Bembere. The away fighter made sure McGlynn was switched on for all four rounds of the contest. McGlynn was a successful amateur and at one stage was the highest rated in his weight class. But he walked away from the sport in his early twenties unsure whether to pursue a career in the professional ranks. McGlynn recently opened up to Scottish Boxing News about his ongoing battle with depression, which – along with other factors – effected this training camp. There is no doubt that he is a talented fighter and will continue to build his experience and confidence guided by his trainer-father and Kynoch Boxing. We wish him all the best in and out of the ring, and hope to see him again soon.

It was a genuinely entertaining Night of Boxing in Glasgow: a mix of talented prospects and returning established fighters gave the fans value for money. The venue is a welcome addition to the Scottish boxing circuit; there was not a bad seat in the house. And we hope the television cameras, significant figures from the sport, and – most importantly – credible and competitive matches return to the city again soon.