Simmons announces retirement plans, but first has history to make

It’s not usually a good idea for competitors to announce their retirement in advance. It can suggest weakness, distract and undermine credibility.

Sir Alex Ferguson said he was retiring at the end of the 2001/2 football season. He dreamt of walking away after lifting the champions league trophy at Hampden Park in his beloved hometown. But he soon reversed that decision after United had a run of six defeats before Christmas. The team never fully recovered, finishing third in the league and were knocked out of Europe in the semis. Reality had smashed the romantic ideal.

Kell Brook recently didn’t fill the boxing world with confidence after hinting that he may retire at the end of the year. Brook should be portraying strength as he comes back after a series of major injuries, not uncertainty. Fans saw a man clamouring for the Khan fight rather than preparing for a serious world title challenge.

And of course legends Bernard Hopkins and Miguel Cotto had unsuccessful last bouts, leaving the sport in a way they had not imagined, albeit with their legacies intact.

It was surprising then when Scottish cruiserweight Stephen Simmons, approaching one of the most important fights of his career, said he would be hanging up the gloves at the end of 2018. The Edinburgh man will face Matty Askin for the British cruiserweight title on 17 March at London’s prestigious York Hall.

‘This is my last year and then I’m finished. I want to move over to the coaching scene, and I’ve also been lucky enough to get a good job.

I’ve had a good amateur career, a good pro career, and I’m happy with what I’ve achieved in my life. From growing up in the streets of Calder and Wester Hailes, getting thrown out of school five times for fighting, boxing changed all dynamics for me. I went on to represent my country all over the world.

I’m going to make history in this fight… push on for a world title… and then live the family life with my wife and baby.’ 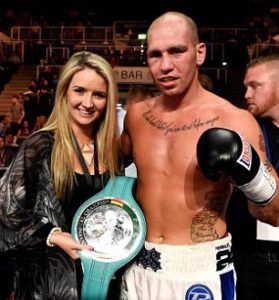 These announcements can provoke doubt – is the person injured, past their best, lacking commitment? – but there was a sense of calm in Simmons. He spoke confidently, content with his various achievements in the sport, and focused on adding to them in his final year. He also has the incentive of being the first ever Scot to win the British cruiserweight belt if successful.

Askin will be no push over. The 6’4 Englishman and current champion has a number of solid wins on his record. But in a sport of uncertainty, there is something dangerous about a man who has clarity and security. Simmons, who has solid amateur pedigree, and is current IBF European champion, can now single mindedly dedicate himself to a final assault on the division. We look forward to seeing how it unfolds, and hope it involves an historic win down south.