Scottish boxing fans were devastated back in April as Ricky Burns lost his super-lightweight title to Julius Indongo. We were disappointed for Ricky – the country’s most successful boxer and one of the sport’s good guys. And we were also gutted for ourselves, the supporters, as we faced the bleak prospect of being deprived of big-time boxing for the foreseeable future. 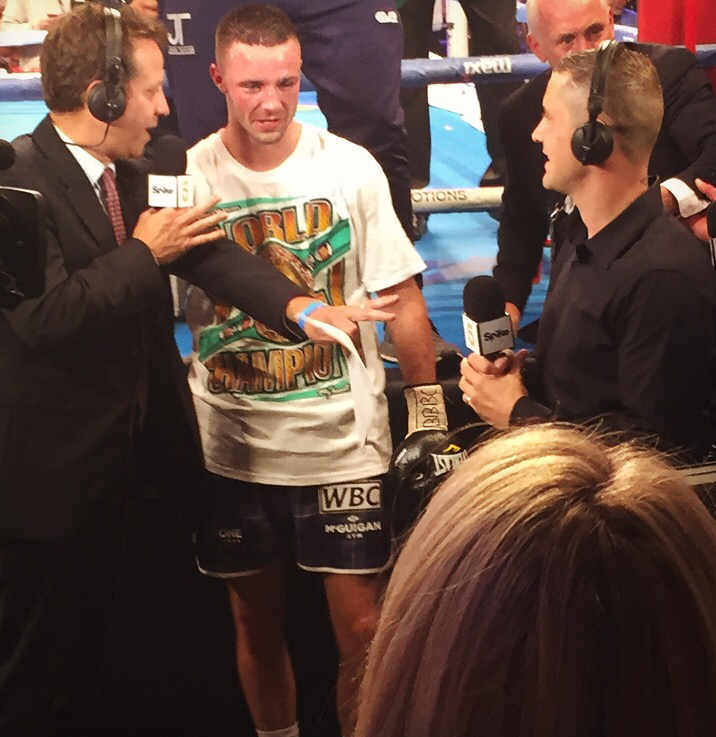 Scottish boxing has been so reliant on Ricky – and by extension Matchroom Promotions – in recent years that his defeat and possible retirement could have left our scene without a star attraction. Thankfully Burns confirmed that he would fight on and challenge again for honours. But most encouraging has been the emergence of Cyclone Promotions’ Josh Taylor, and a host of other promising young talents.
Taylor was extraordinary on Saturday, July 8th as he brutally dispatched of Ohara Davies to announce his arrival at world-level. Bad Blood also had a number of other hot prospects on display on the evening’s card. 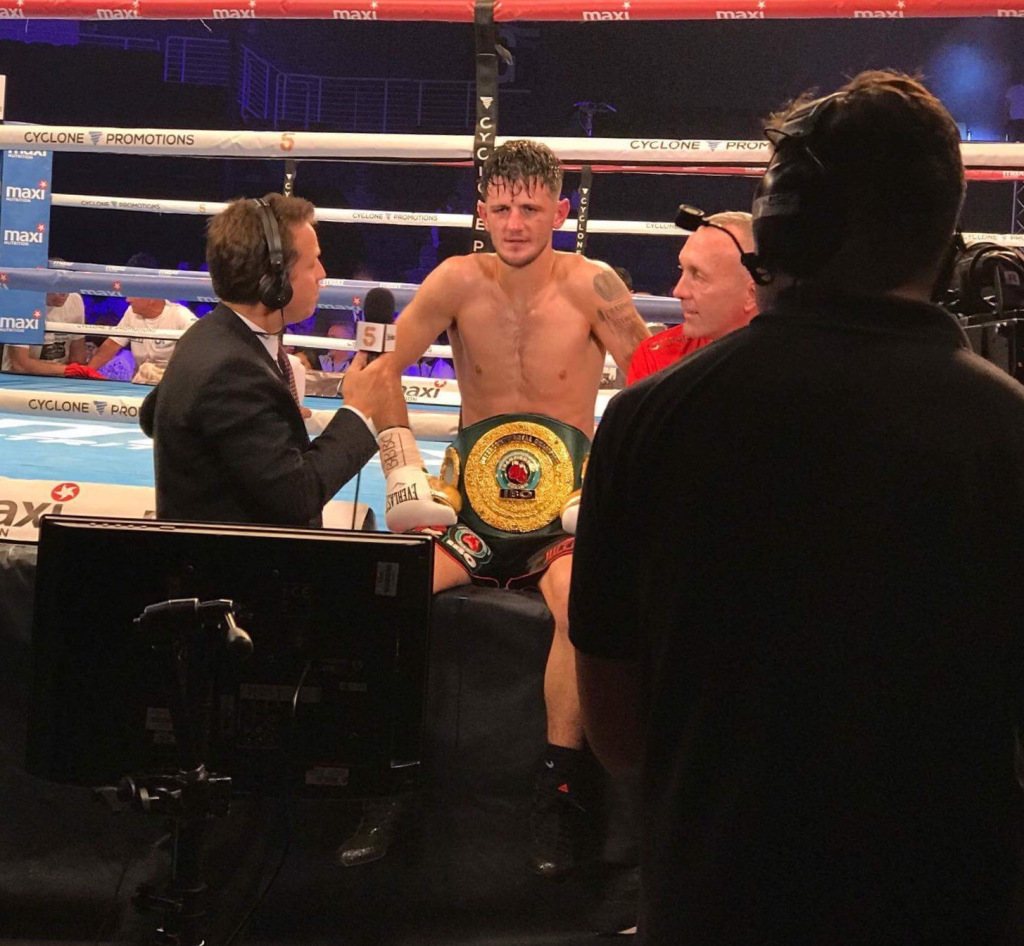 Edinburgh’s Jason Easton was involved in a thrilling toe-to-toe war with Steve Jamoye. It was action-packed from the first bell as the tough Belgian looked aggressive and confident. Jamoye had success with his counters and landed some powerful combinations in the opening rounds. Easton endured a cut to his right eye, and appeared to be in for a tough night ahead.

Yet, sensationally in the fourth, Easton landed a vicious flurry of hooks and stunned Jamoye. He was now settled in the fight and began to win the majority of exchanges. Easton dazed Jamoye again in the fifth, sixth and eighth rounds with sharp combinations, threatening to stop the contest. However, frustratingly for the home support, Easton kept a low guard and was repeatedly tagged by Jamoye.

There were periods of real toe-to-toe action with both men landing heavy blows. But Easton’s superior boxing ability and fitness proved to be the difference. He stopped his opponent in the closing stages of the ninth round after another barrage of punishment; the referee stepping in to save the bruised Jamoye. Easton moved to 10-0 and captured the vacant IBO Intercontinental title. He was thoroughly entertaining live on Spike TV, and there will be demand to see him out again soon.

Cruiserweight Stephen Simmons returned to action for the first time since the birth of his son earlier in the summer. The Edinburgh man was up against tough Polish journeyman Lukasz Rusiewicz in a scheduled six round contest. Simmons looked strong and dominated the Pole with his jab and shots to the body. However, he couldn’t establish any real fluidity as Rusiewicz repeatedly charged with his head, held and spoiled any exchanges. He was so persistently negative that, after two point deductions, the referee finally disqualified Rusiewicz, declaring Simmons the winner.

Simmons is now looking forward to a potential British title fight later in the year. There have been some entertaining back-and-forth exchanges on social media with fellow cruiserweights Matty Askins and Lawrence Okolie in recent days, suggesting there may be some high-profile fights to be made.

Cyclone Promotions’ Chantelle Cameron announced her presence in a flourishing woman’s boxing scene after an impressive victory against Poland’s Bojana Libiszweska. Cameron was magnificent in only her second professional contest. The Shane McGuigan-trained fighter displayed sharp movement, quick hands and skills that would have impressed the most cynical boxing purist. Cameron threw a punishing right hand that failed to miss throughout the contest, as the referee intervened in the fourth to save Libiszweska from further punishment. 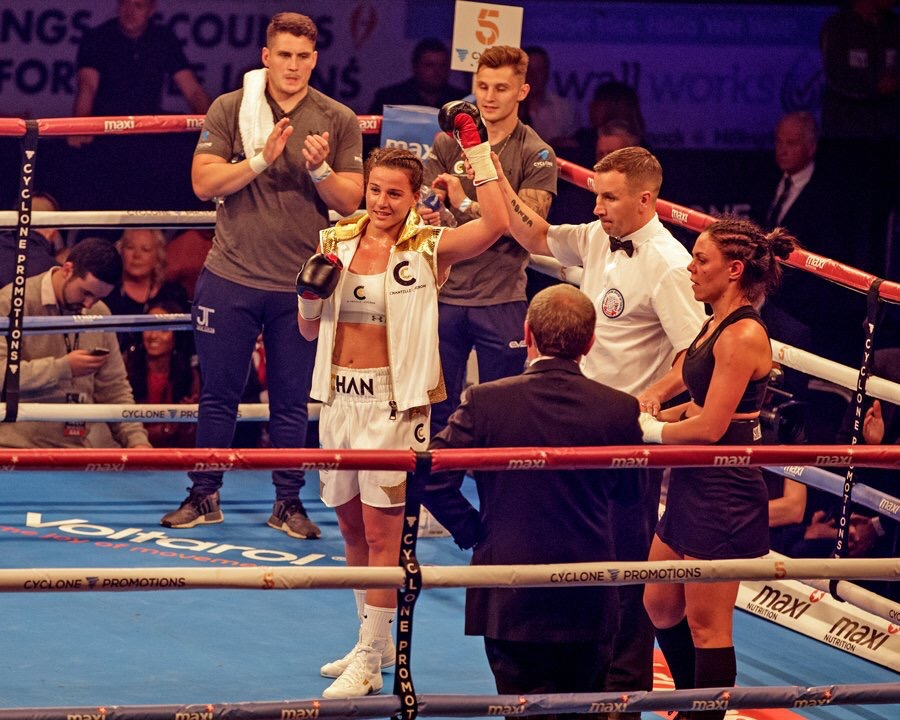 Barrhead’s Gary Rae extended his unbeaten record to 5-0 after a deserved points-victory against Luis Espinoza. The Spaniard looked game and competitive in stages, but was ultimately outclassed by Rae. Gary was by far the busier man and threw the cleaner shots; wobbling Espinoza in the fourth with a strong right hand. The likable Rae won 40-36 and is on a fine run of form.

Iain Trotter improved his record to 4-0 after a surprisingly tough challenge against Borislav Zankov. Little was known about the opponent, but Zankov – who entered the ring to the Rocky theme tune – looked strong, crude and resilient. He caught Trotter several times and caused some redness to the Edinburgh man’s face. However, Trotter was the more skilled operator and claimed the rounds with more effective shots and movement. Trotter began to pull away as Zankov tired and eventually won the contest 40-37. It was a tough but useful learning fight for the Billy Nelson-trained fighter who should be out again before the end of the year.
Former British Lionheart Aston Brown continued his successful move into the professional ranks against Konstantin Alexandrov. Brown easily claimed every round of the contest with superior shots and footwork. Alexandrov was largely negative and tried to frustrate Brown, but he remained patient and outclassed his Russian opponent. Brown had an impressive amateur career and has signed a promotional deal with Frank Warren. Fans should keep an eye on the talented Glaswegian who is likely to be fast-tracked into some big domestic clashes.
It was also a successful evening for Gary Murray who opened the card with a points-victory over Gergo Vari. Murray unleashed impressive body shots throughout the fight, and will be raring to go again soon in the super welterweight division.

Fans in attendance were treated to a thrilling night of championship boxing. Bad Blood had genuinely competitive and entertaining contests, and fans can be reassured that the future of the sport in Scotland is promising. There is no longer a dependency on a single figure, company or brand, and that can only be healthy.